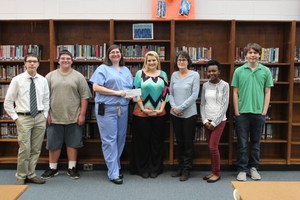 Many thanks to the Howard Center for sponsoring NEC FBLA students for competitions.

The team were part of several Tift County FBLA members who participated in Region Competitions, at Southern Regional Technical College’s Moultrie Campus, this past January. The Parliamentary Procedures Team placed first in the region. In addition to earning first place at region, the team also qualified for state competition. “Only the top seven teams in the state earn an invitation to compete at the state level.”  said adviser Melissa Busbin, “we are excited to be one of those 7 teams.”  The competition begins with an individual objective test administered in January. Team members’ scores are combined to determine the overall top score. Teams that earn a spot at the state level will take another objective assessment in early March and then compete in a live performance during state competition March 23-24 in Atlanta. “Our team is comprised of all freshman members, which is an exciting future for our chapter,” Busbin stated. If the team qualifies in the top four at the state level, they will earn an invitation to compete at the national FBLA conference in Baltimore this summer.

Drs. Kaylar Howard and Melissa Moore, of the Howard Center for Women’s Health, presented the team with a donation to benefit the team and offset some of the costs associated with advancing to the state level.  “We are very proud of these students,” Howard said, “and are happy to help them reach their goals.” Both Moore and Howard, took time to speak with the team to encourage them and express their support for the team as they prepare for the next competition.  The team members, along with Mrs. Busbin, express their sincere gratitude to the Howard Center for Women’s Health for the donation. “It is important for our students to know the community supports them. We are blessed to have so many businesses and organizations in Tift County that are willing to support our students,” stated Busbin.

The team will compete in the next round of testing in early March, before heading to Atlanta later in the month for the  final rounds of competition.