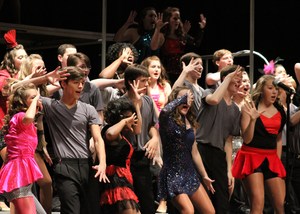 Show choir hopefuls auditioned in March and April 2015, and for the talented members accepted to any of the three Tift County show choirs, practice began in July 2015. Competition season began the last weekend of January and ended this past weekend. That’s six months of practice for either two (middle school) or four (high school) chances to prove their stuff. And yet, with those limited chances to prove themselves, the groups still managed to come home with a combined total of nineteen awards for the 2016 competition season.

Tift County's One Voice show choir, comprised of 6th - 9th grade students and under the direction of Pam McClellan, competed in two competitions this season. At the Capital City Classic in Montgomery, AL, they placed 2nd in their division with their competition show, "We Love New York." A week later in Albertville, AL, they won the People's Choice Award (voted on by the audience) and placed 4th in their division. In addition, One Voice member Danarius Bush captured the award for best solo within a show with his solo, “New York State of Mind.”


The winning didn't stop there for the choral program, though. TCHS Choral Director Scott Rains took his two show choirs to four competitions this season. The members of the TCHS all female show choir, Ladies Choice, came home with their own trophies. The group's show, "Snapshots of the 60s," was a winner this year, earning a third place finish in Montgomery, AL, a fourth place finish in Albertville, AL, and a first place finish for the Women’s Division in Evans, GA, at the Georgia Vocal Invitational.


Finally, also in attendance at all four competitions this season were the 45 members of the TCHS Eighth Street Singing Company and their 16 member band. This group made the leap from small mixed group to large mixed group this season – pitting them against groups of 60+ members. However, armed with their edgy show, “Carpe Diem,” which explored the idea of what awaits us after high school graduation as we find our way in the world, the group took to the competition scene. In Montgomery the group finished 3rd in the division with ESSC members Terrance Searcy and Bailey Lawson both placing in the top five in the male solo competition. In Albertville the group earned a 3rd place finish for their division in prelims and qualified for finals where they finished 2nd place out of 25 groups overall. Two weeks later the group traveled to Evans, GA, where they won Best Overall Effect and placed 2nd in their division, with Searcy and Lawson placing 1st and 2nd respectively in the male solo competition. This past weekend, the group traveled to Enterprise, AL, where Searcy won the male solo competition. The group placed third in their division, qualified for finals, and placed 3rd overall out of 20 show choirs. Clearly the group made the most of the season and “Seized the Day” every opportunity they had.


Now the Tift County Choral Department would like to give the public a chance to see and hear all three award-winning groups. All three groups will perform their competition shows, with Searcy and Lawson performing their winning solo pieces at the Show Choir Showcase. The Showcase will be held in the TCHS Performing Arts Center on Monday, March 14, beginning at 7:00 pm. Tickets are $7 each and will be available at the door.